Out of all the popular backpacks, I've been saving this one for last because of its reputation for bugs. As far as any book or trip report (from the summer) goes the area is mosquito & black fly infested. We were very lucky and the week before our trip had very cool weather for summer. It rained a bit, and temperature were below average. This must have killed off all the blood suckers because we saw less mosquitoes here than on many a trip to the Rockies. I only remember killing 2-3 that landed on me. That could almost be a record. We were also rained on ourselves as the cooler weather persisted. It stopped some mountain plans along with generally being lazy and recovering from a cold. Instead we took our time hiking to see all the corners of this area including Outpost Lake and the Penstock Creek area above it, Eremite Valley, and the area between the two lakes. All of the side trips were well worth the trip and I am glad we got to do them. Even over a mountain.

It is time to get into the lesser known regions to explore! I am thinking of doing Athabasca Pass next year.

Anyway now for some pictures of Tonquin Valley. 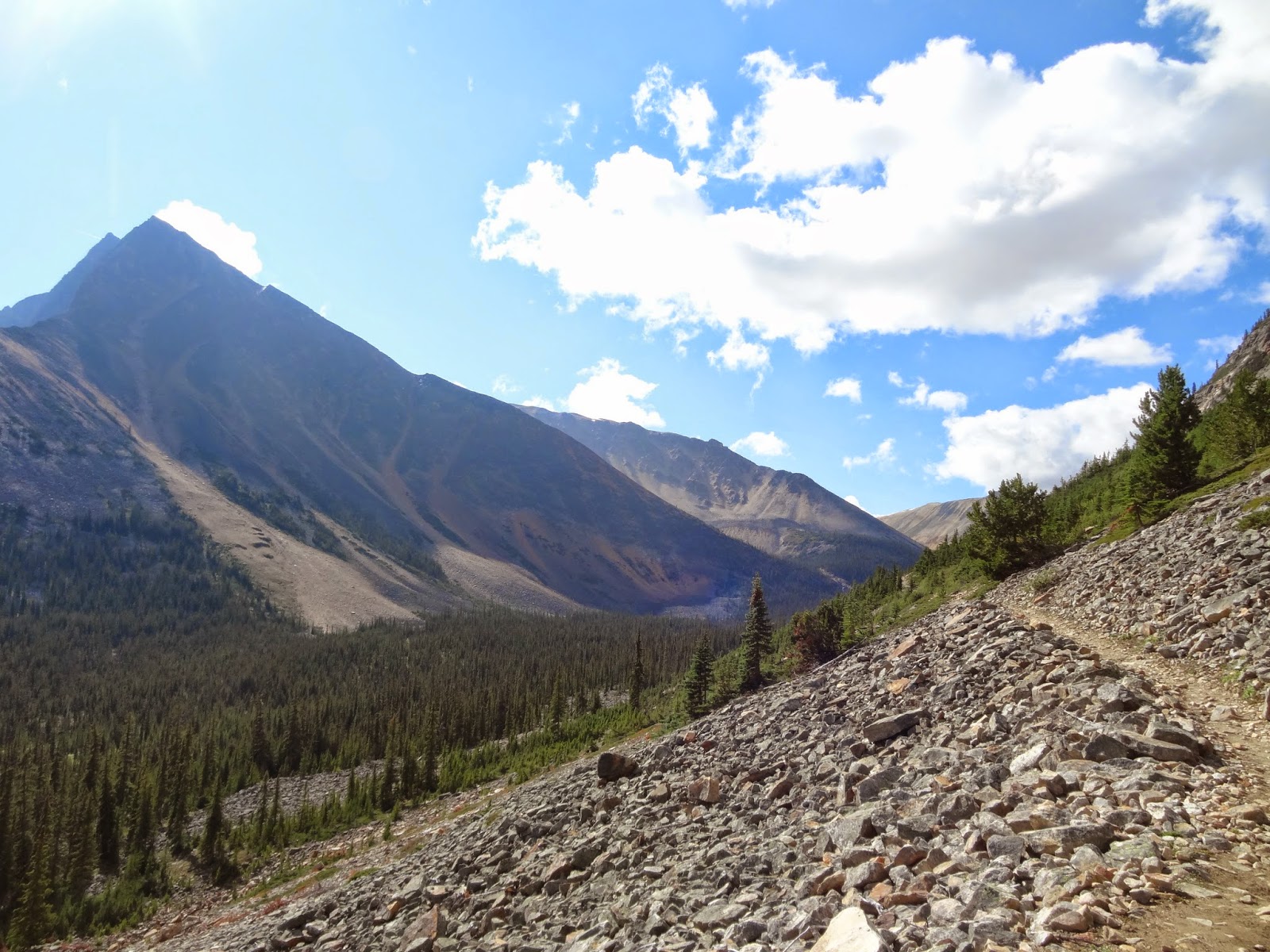 First day. We went in via the Maccarib Pass trail. This is as the trail goes around Peveril Peak. 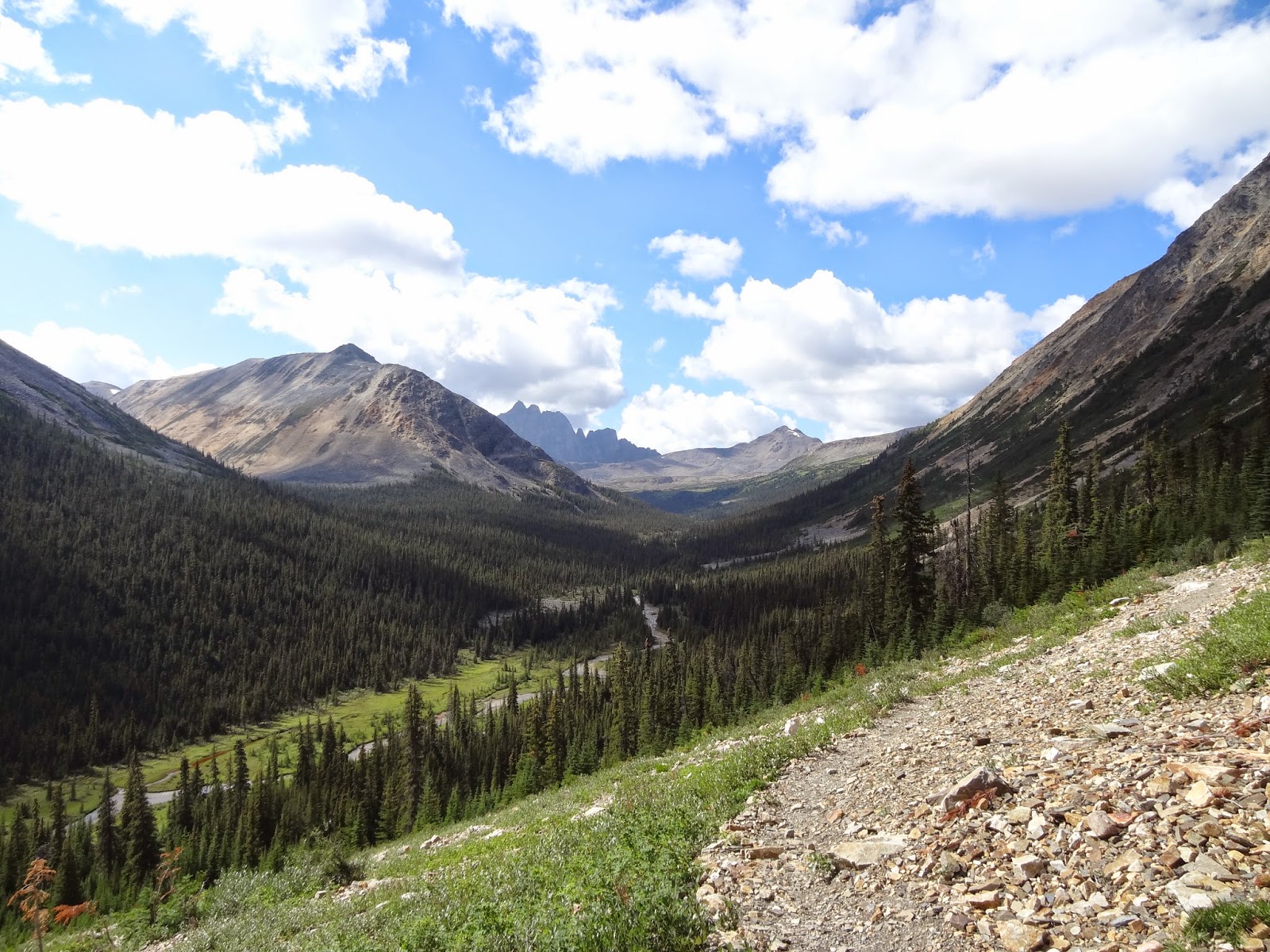 After that you descend a bit into Maccarib Creek towards Portal campground. 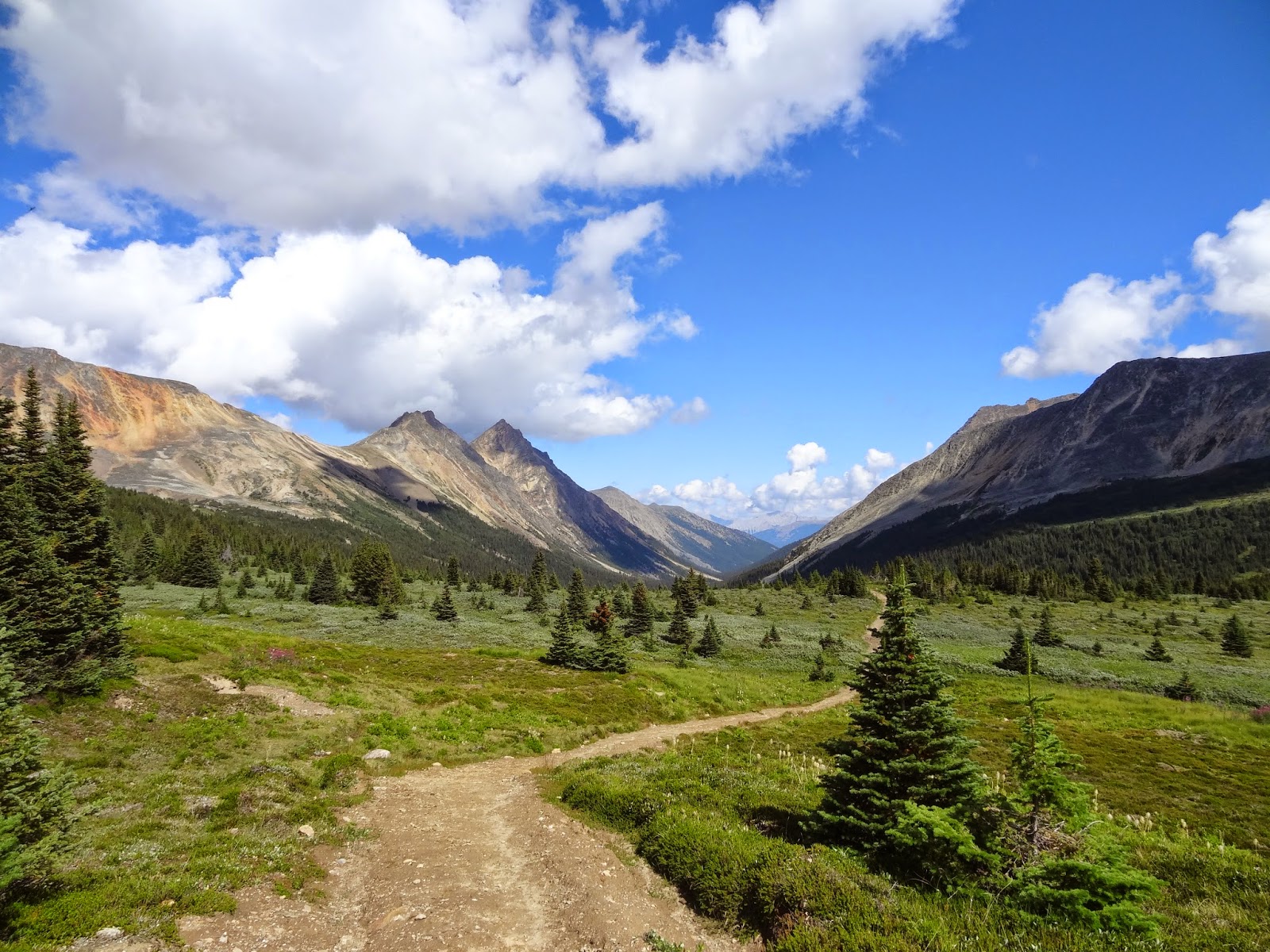 Looking back towards the northeast while on the ascent to Maccarib Pass. 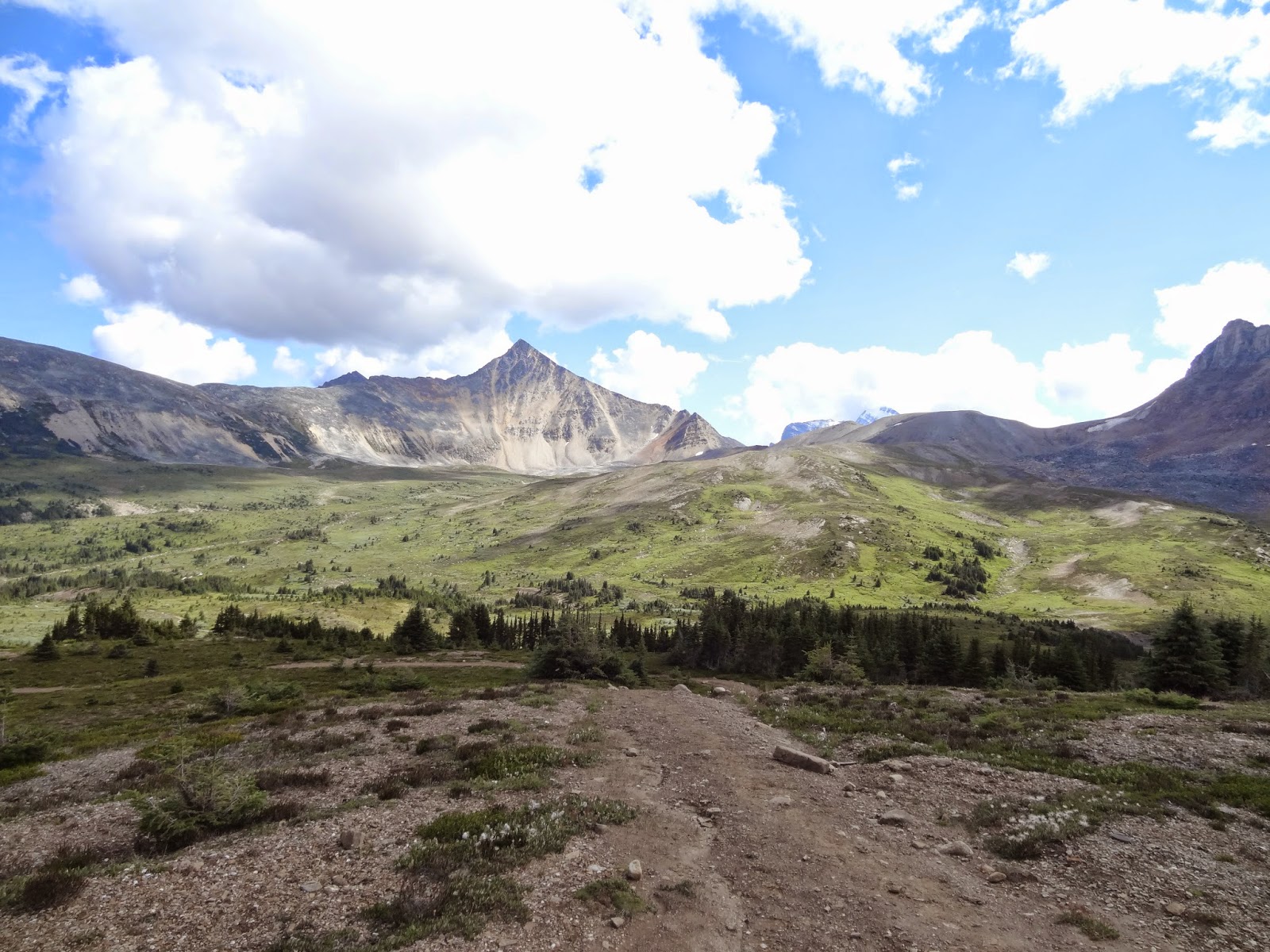 Looking back towards the southeast on the ascent to Maccarib Pass. 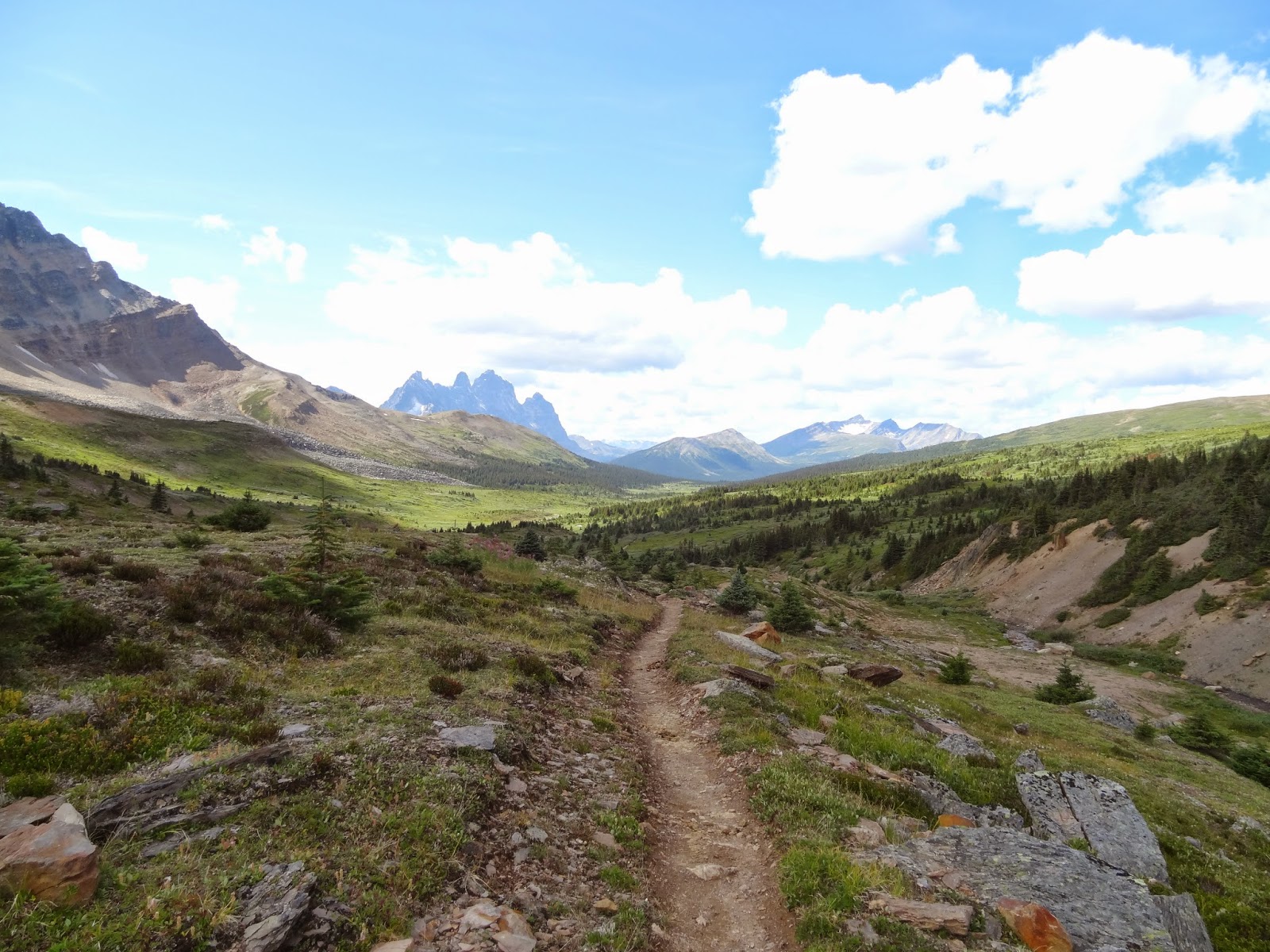 Descending from Maccarib Pass towards Tonquin Valley. Part of the Ramparts are left of center. Ahead is quite a muddy section through a lot of willows. Not the best trail in the Rockies but Tonquin is worth the effort. 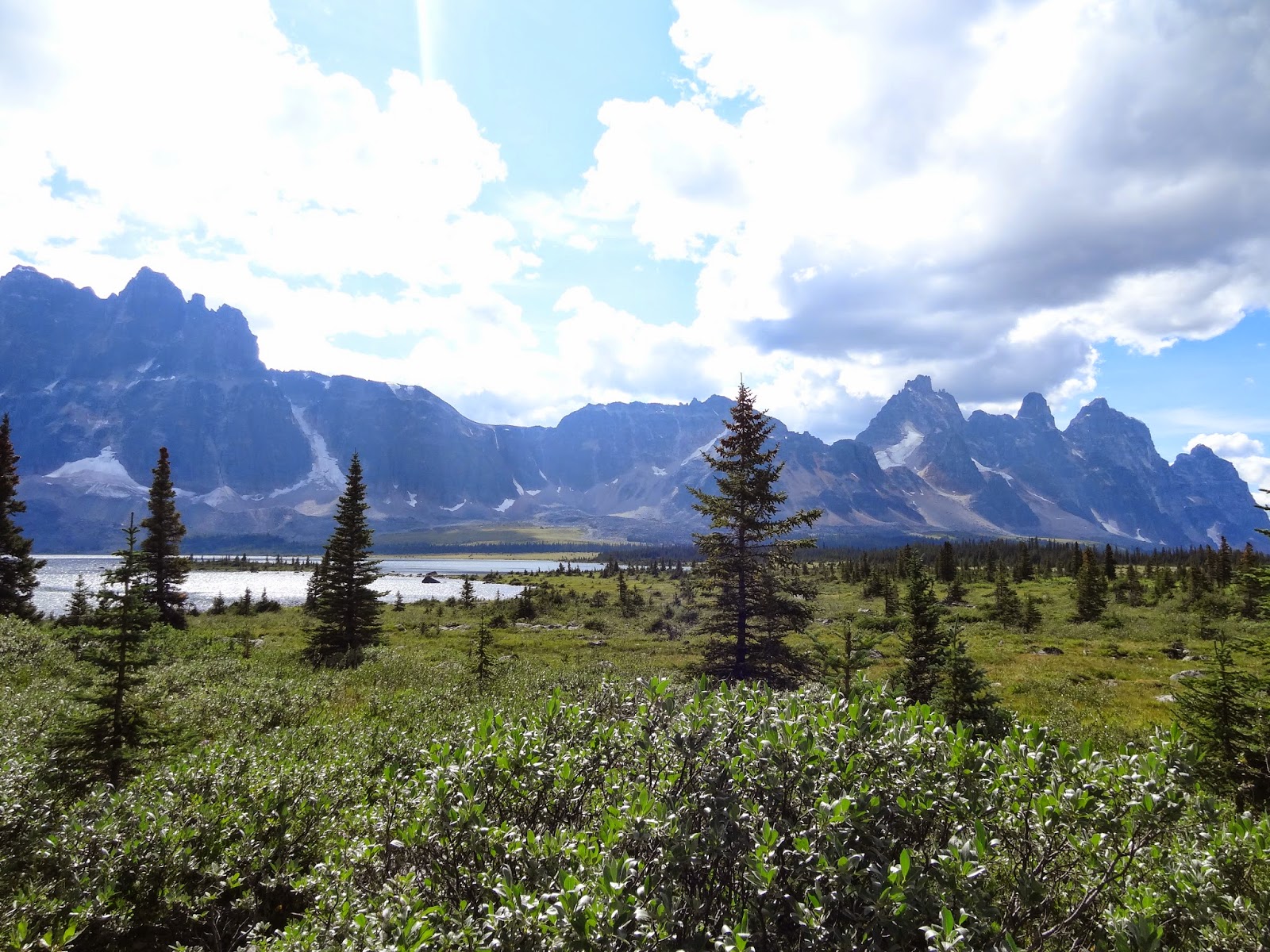 The northern end of Amethyst Lakes. 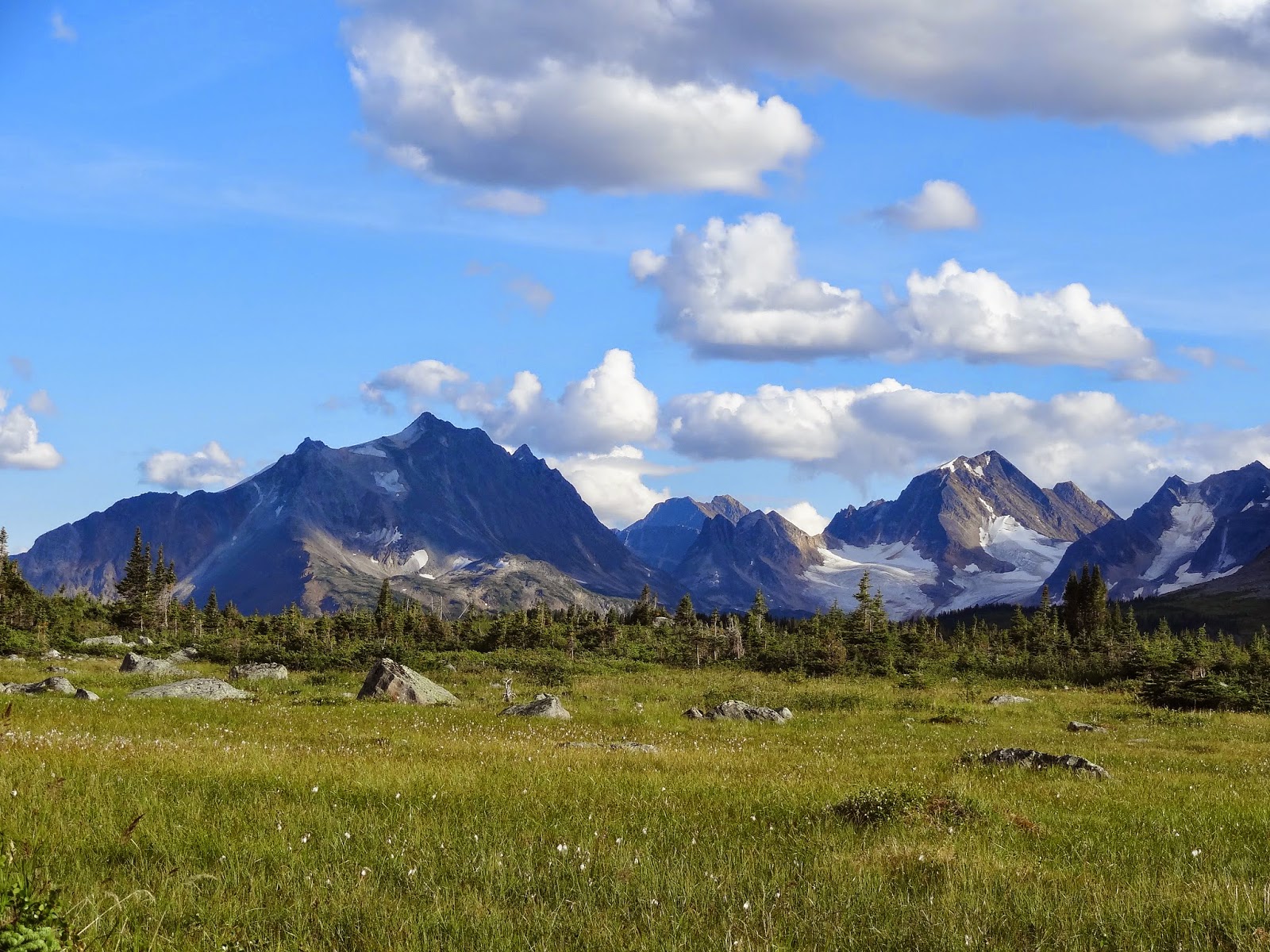 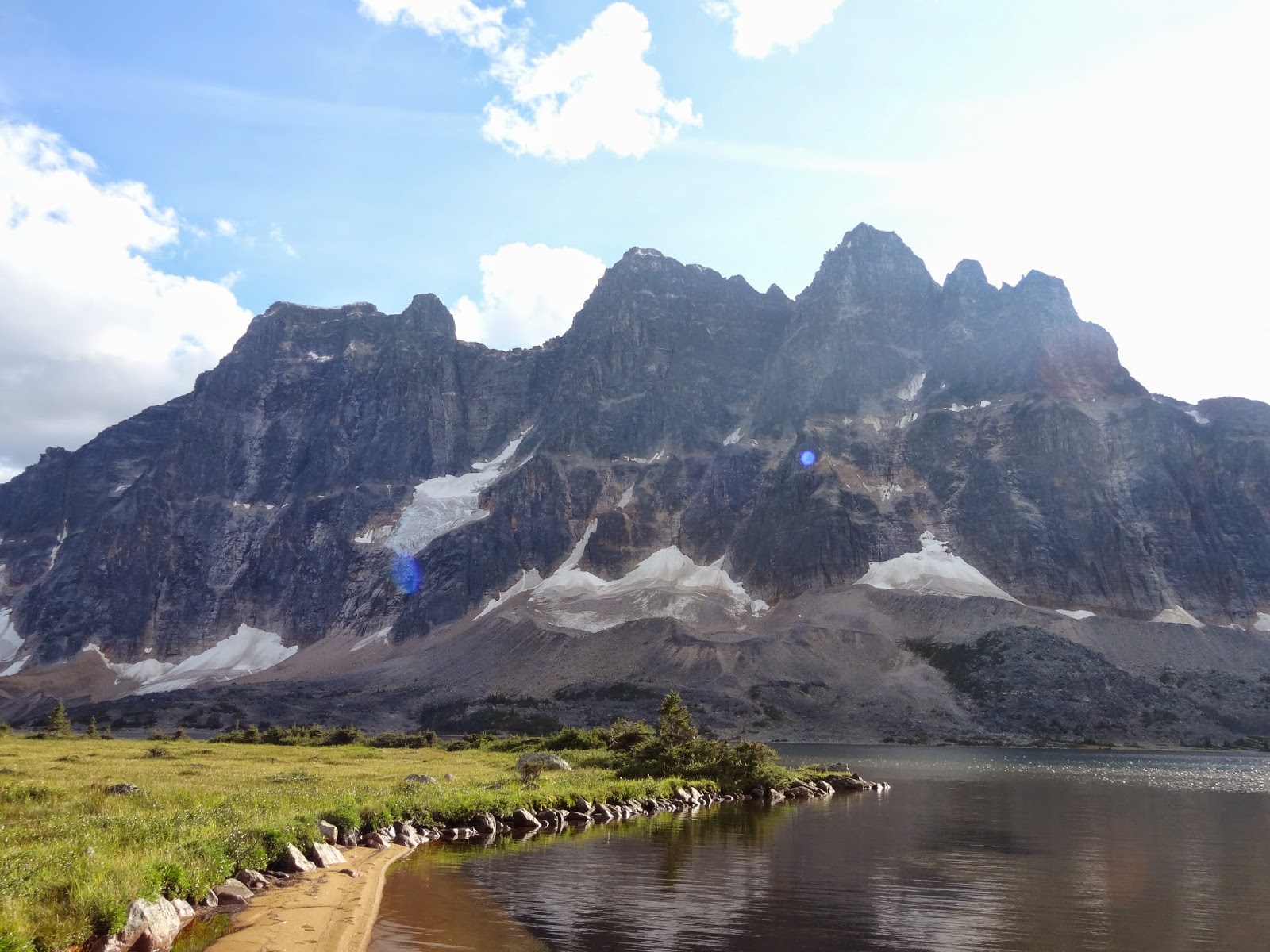 From the lake near Amethyst campground looking at the Ramparts. Specifically Dungeon and Redoubt Peaks. 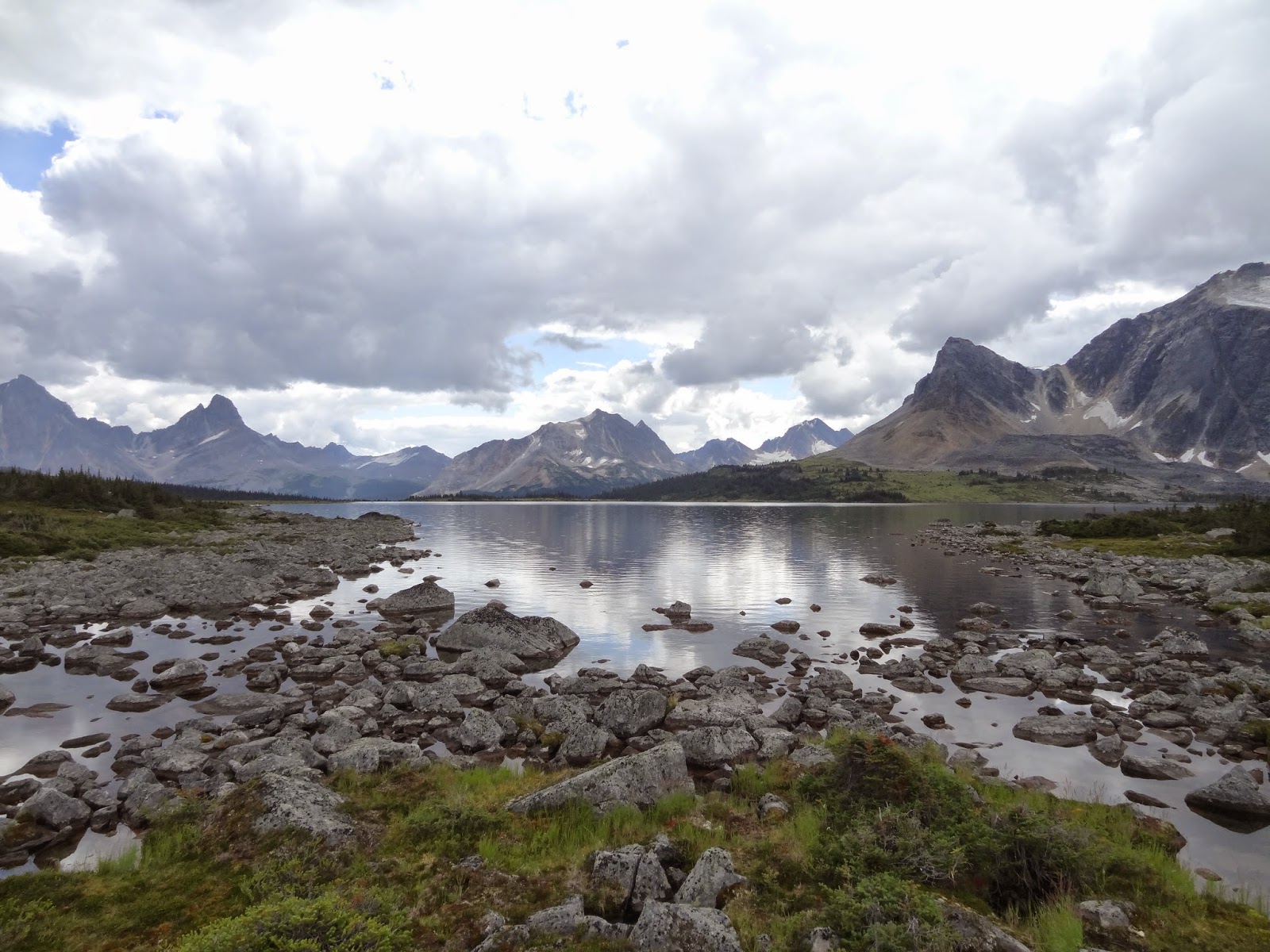 Second day. Going along the marshy and boldery land between the two lakes looking south. Not sure why its Amethyst Lakes with an 's', when to me the water between the two sections of lake looked more like a lake than a river. But that is just the way it is. 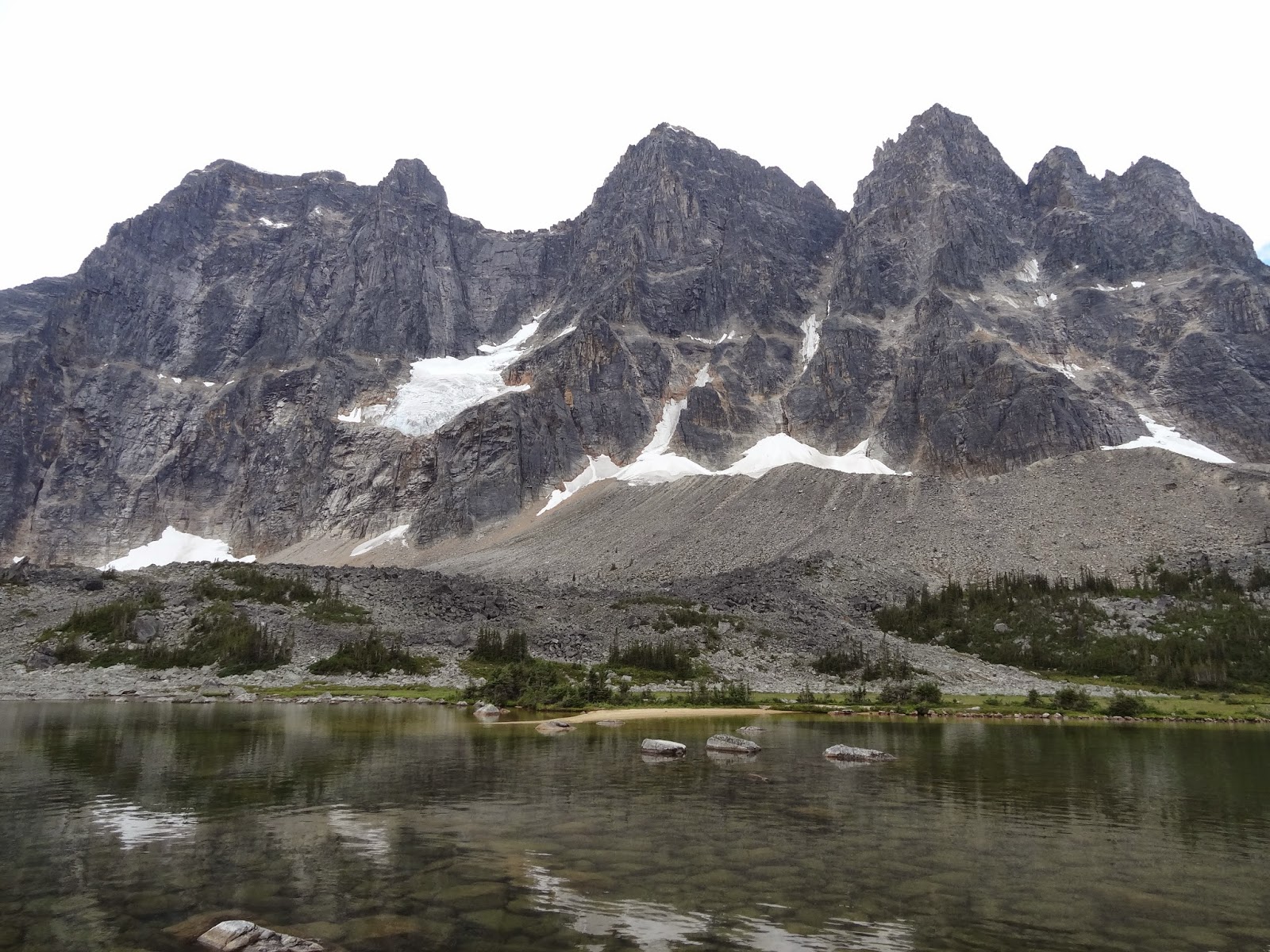 The Ramparts from the western edge of the piece of land and quartizite bolders between the two Amethyst Lakes. 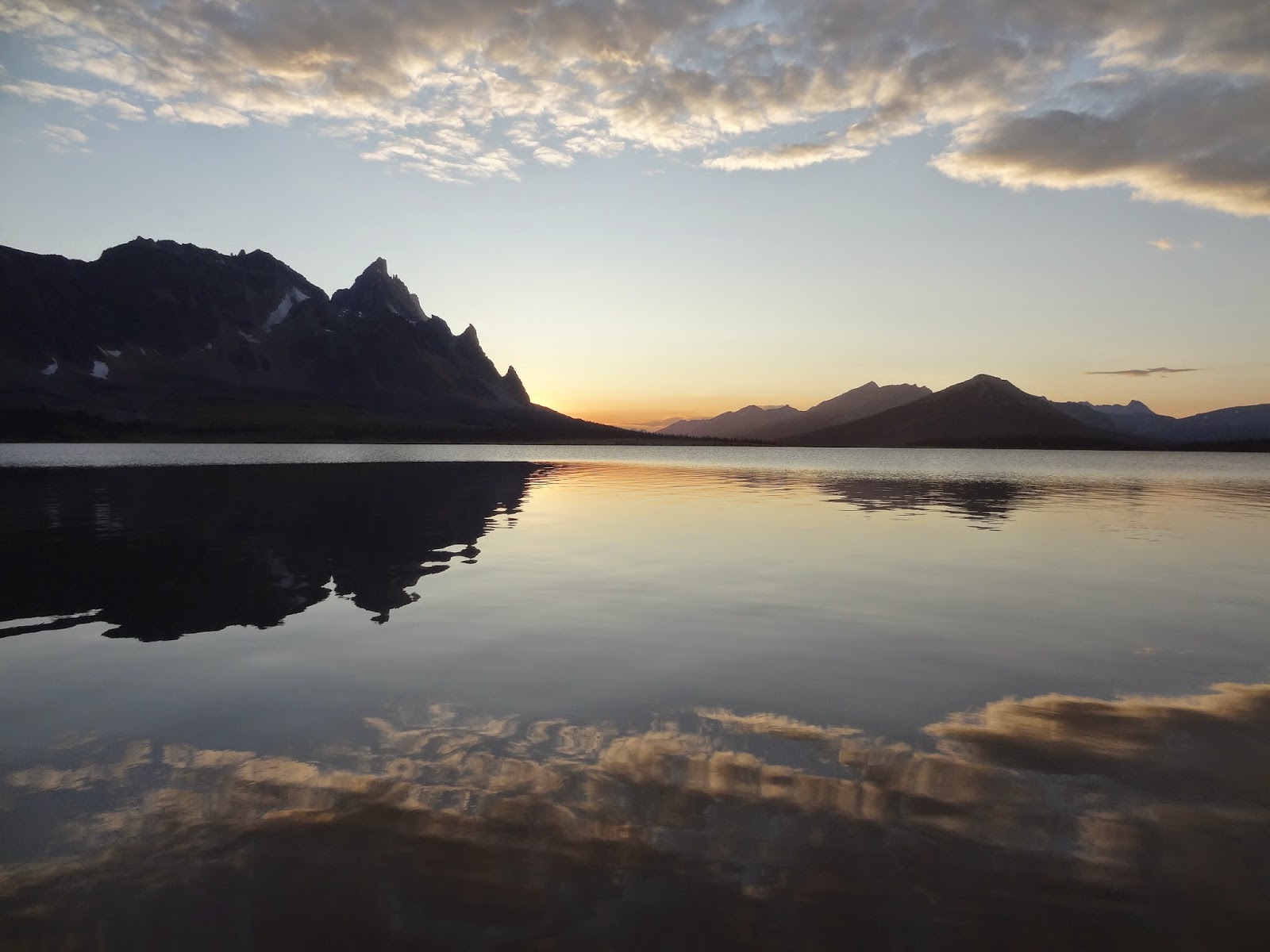 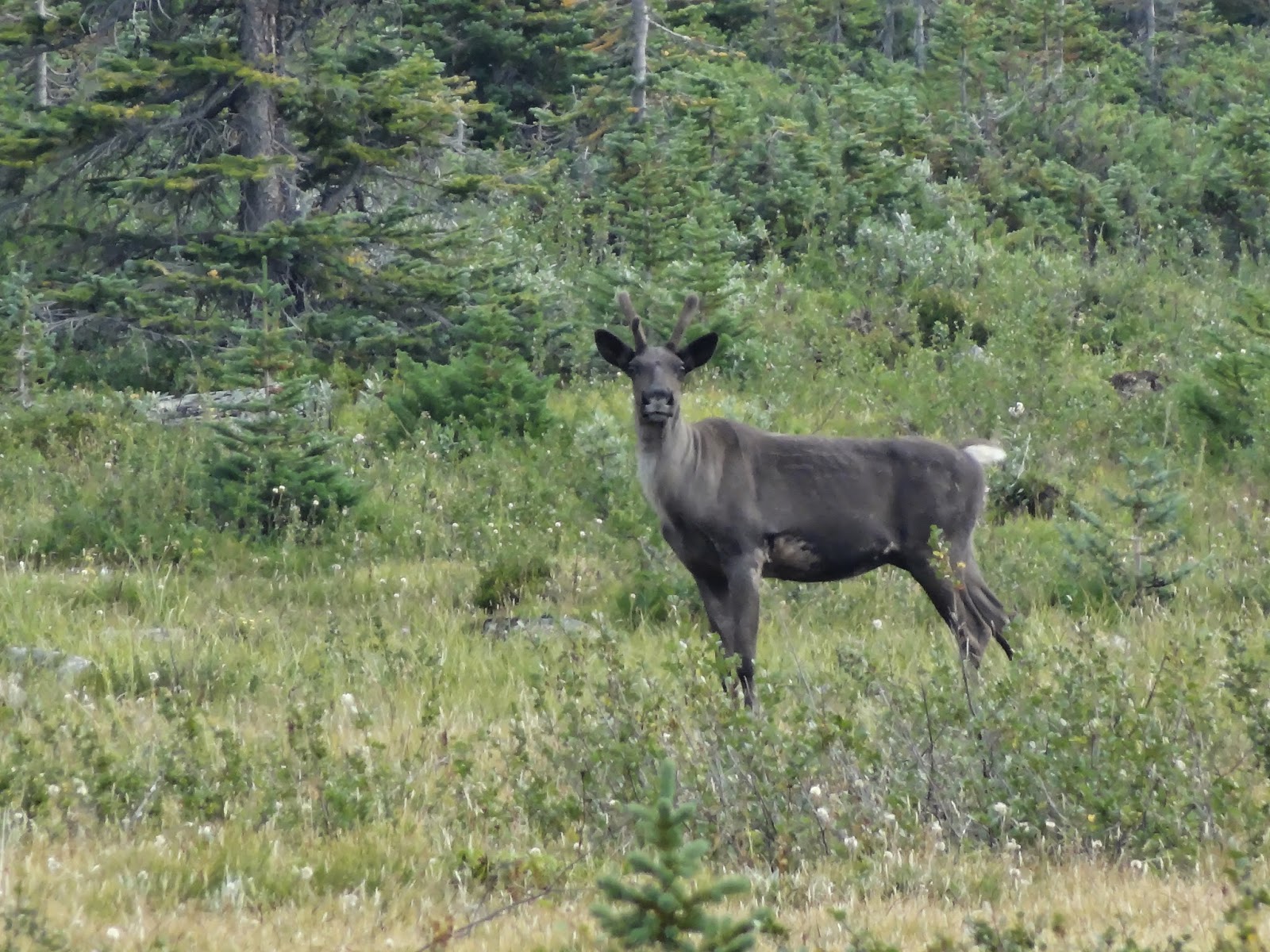 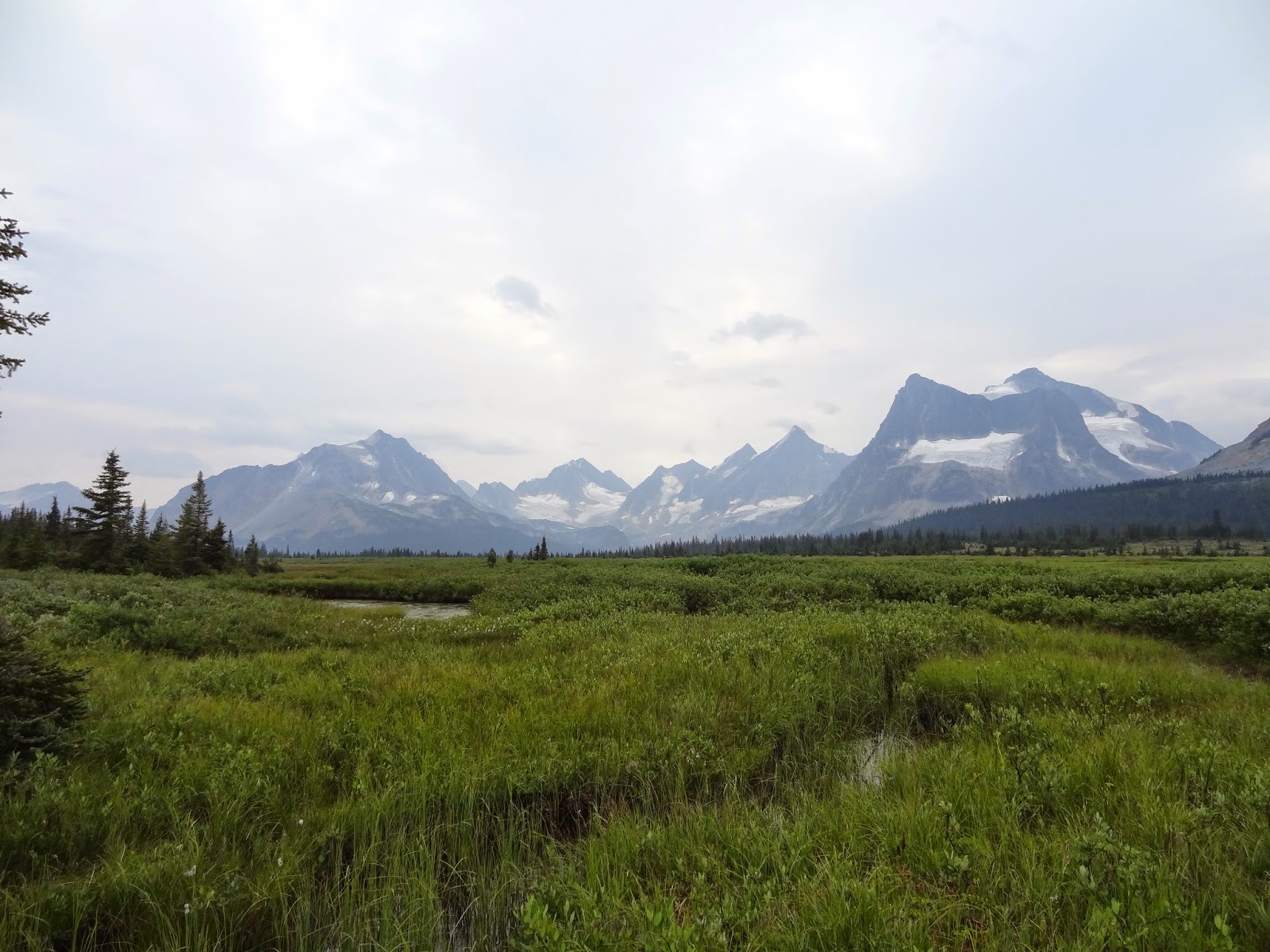 Marshes going towards Surprise Point campground. No wonder this place is mosquito infested during much of the summer. The trail was obvious and easy to follow at this time of year though. 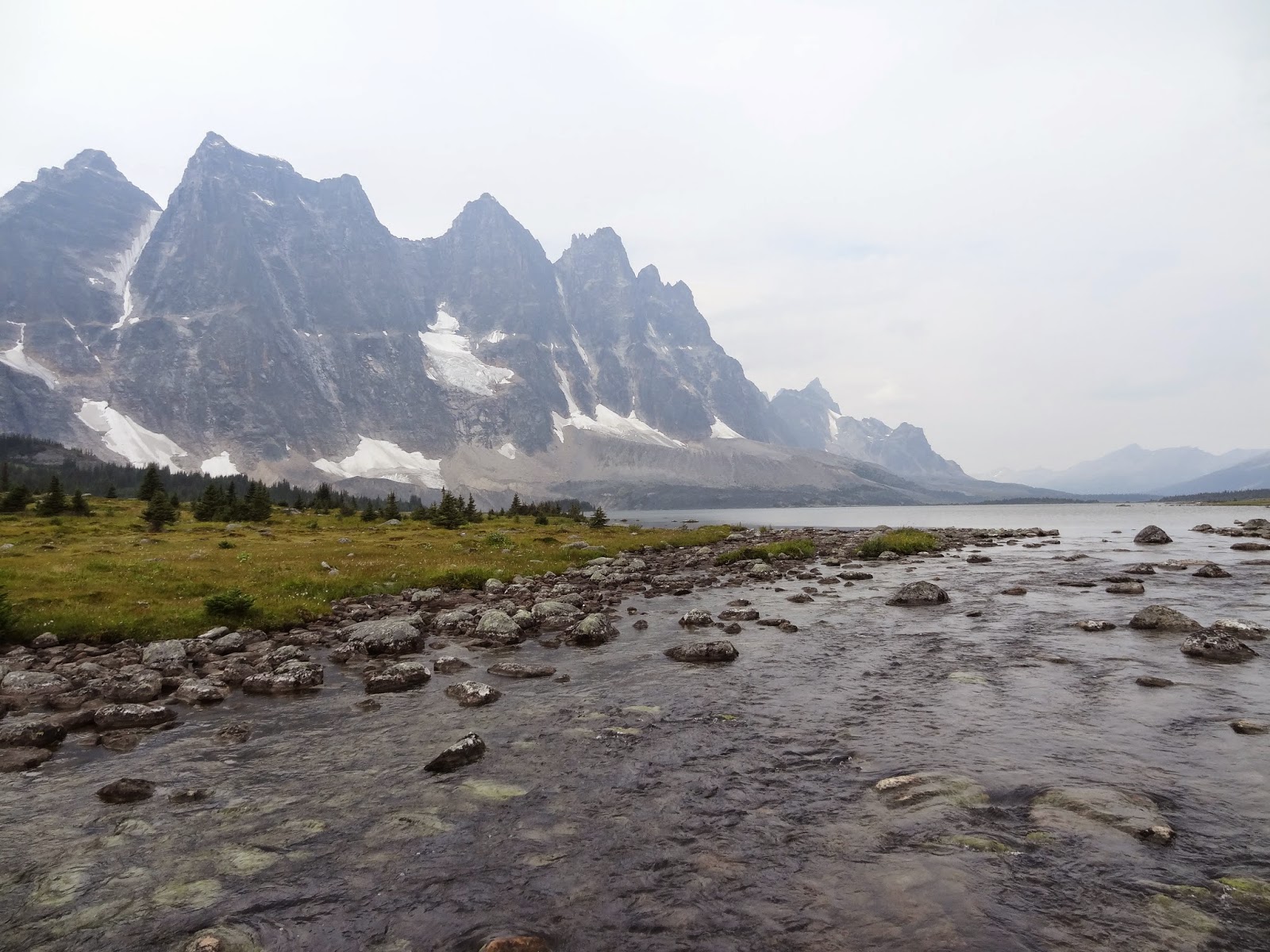 Amethyst Lakes and the Ramparts from the outflow creek. 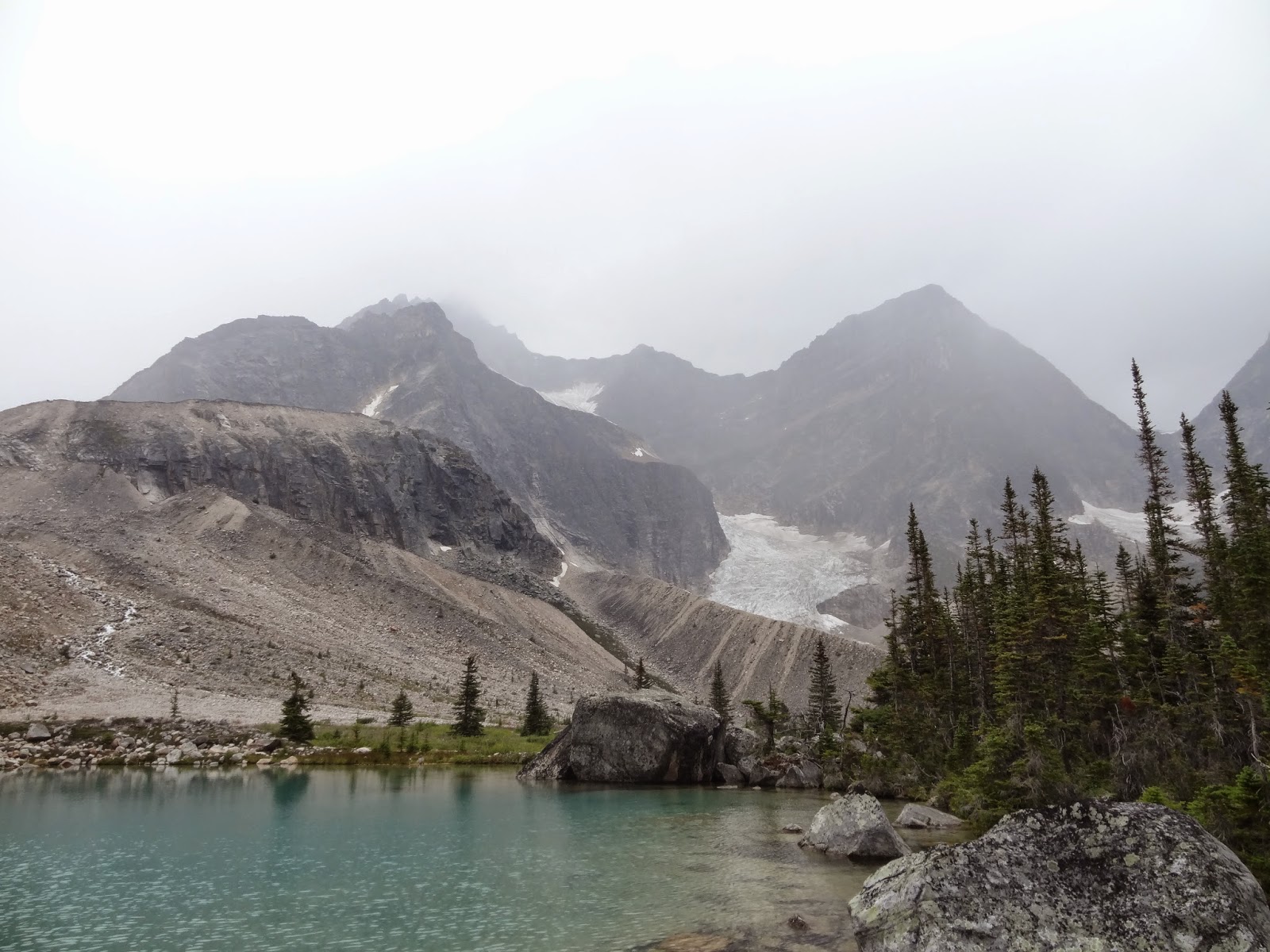 Above Outpost Lake in the Penstock Creek area above treeline. We did this side trip after our quick move from Amethyst campground to Surprise Point campground. This is looking at Parapet Peak to the northwest. Outpost Lake itself was not very picturesque. The climbers trail used to access the area above starts right at the west (far) side of the ACC cabin. It is initially a little steep and then levels out and eventually descends ever so slightly down to the level of this unnamed glacial tarn. There were some cool boulders in this area but we didn't linger because we didn't want to get caught in any rainstorms. 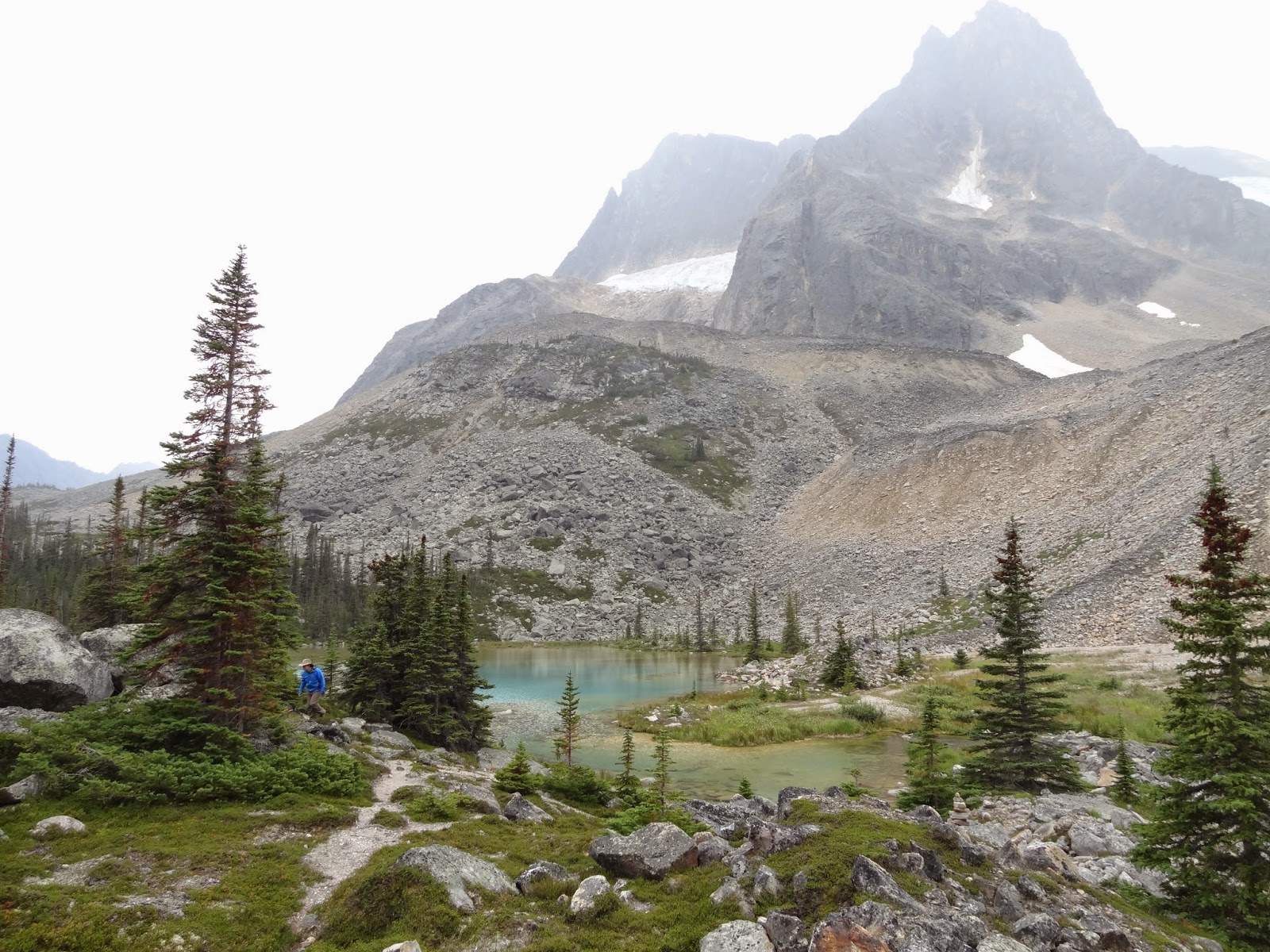 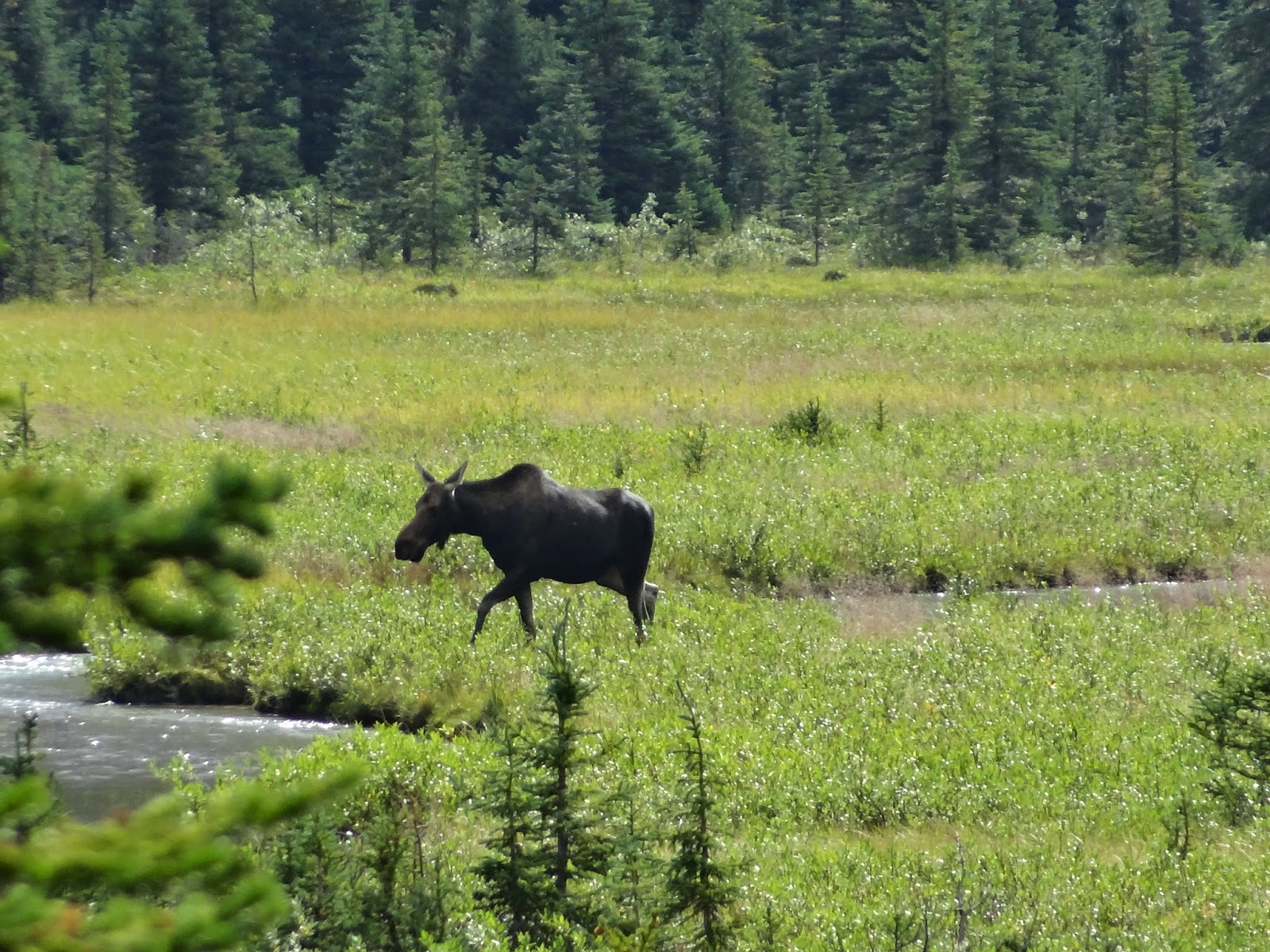 Fourth day. This day we took another side trip into Eremite Valley. Near the trail junction we saw this moose which stared at us while we filtered water for several minutes before moving on. While it was great to camp beside Amethyst Lakes, we did not enjoy doing the 1.9km section of trail between Surprise Point campground and the trail junction area for Oupost Lakes/Eremite Valley/ACC Hut route in 5 times this trip over 3 days due to our side trips and route out. It got very tedious, and it was not a particularly good section of trail. It was muddy in the middle and rocky throughout. A lot of the Tonquin area trails were muddy and/or rocky actually. 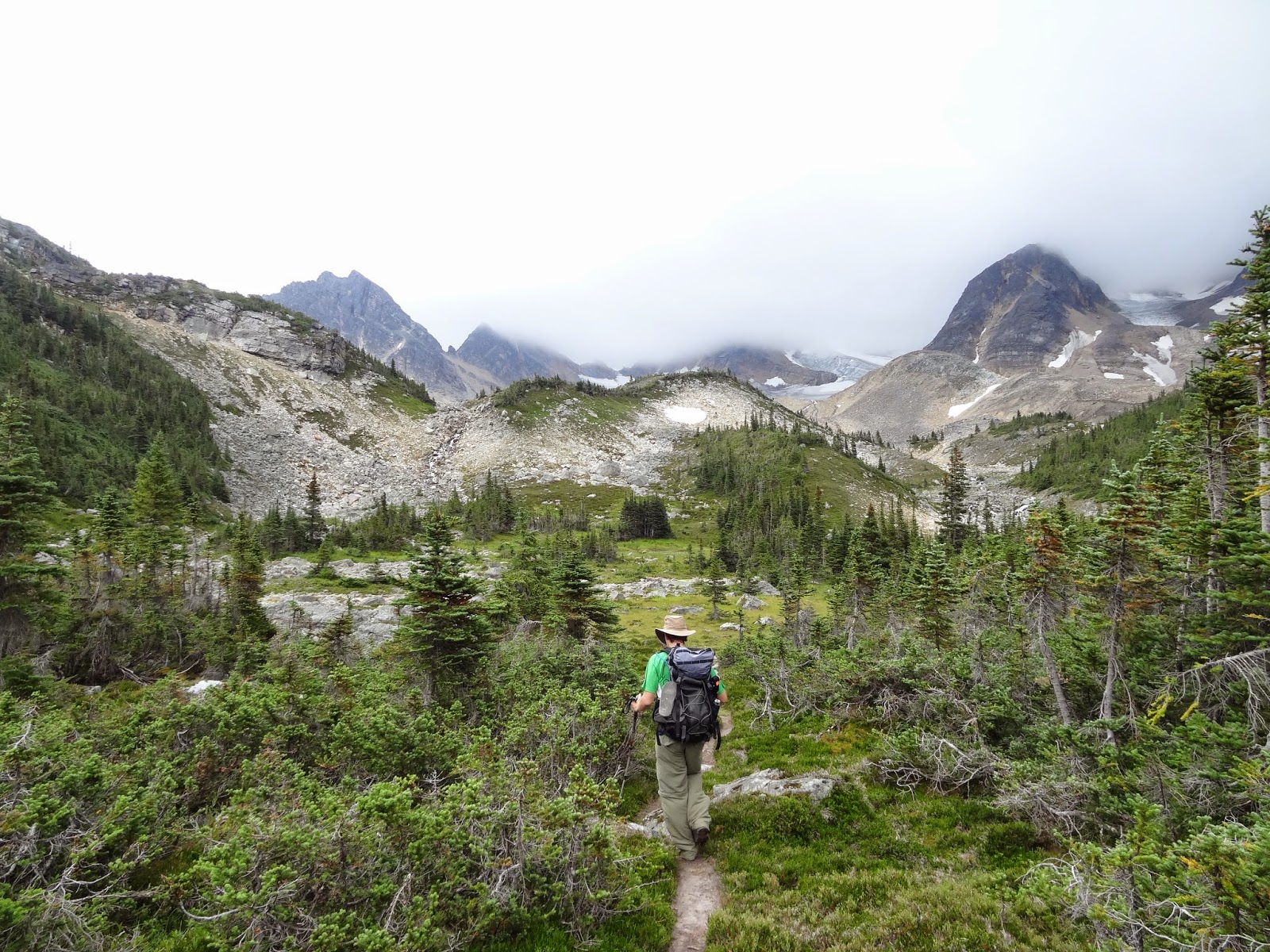 Nearing the end of the Eremite Valley trail which more or less ends at the top of the moraine ahead of us. This day was also overcast though it only drizzled a bit in the afternoon. In the evening just after dark it poured though. It is always an odd feeling lying in your small backcountry tent hearing the rain pour down around you. While drifting on and off from sleep I had vague nightmares about the tent being swept away by water. Some rain is ok, you just feel lucky to be out of it, but what fell that evening was a downpour. 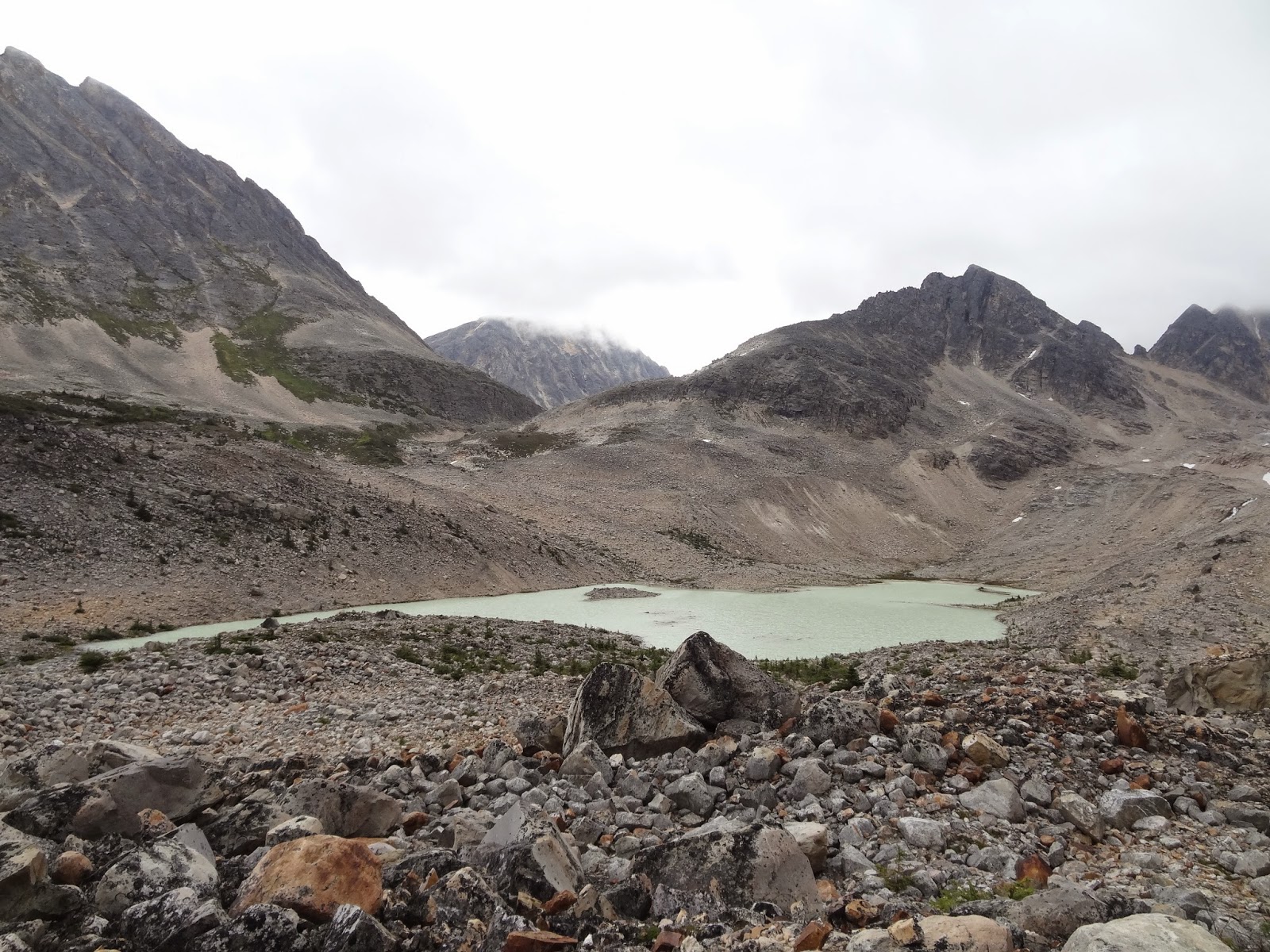 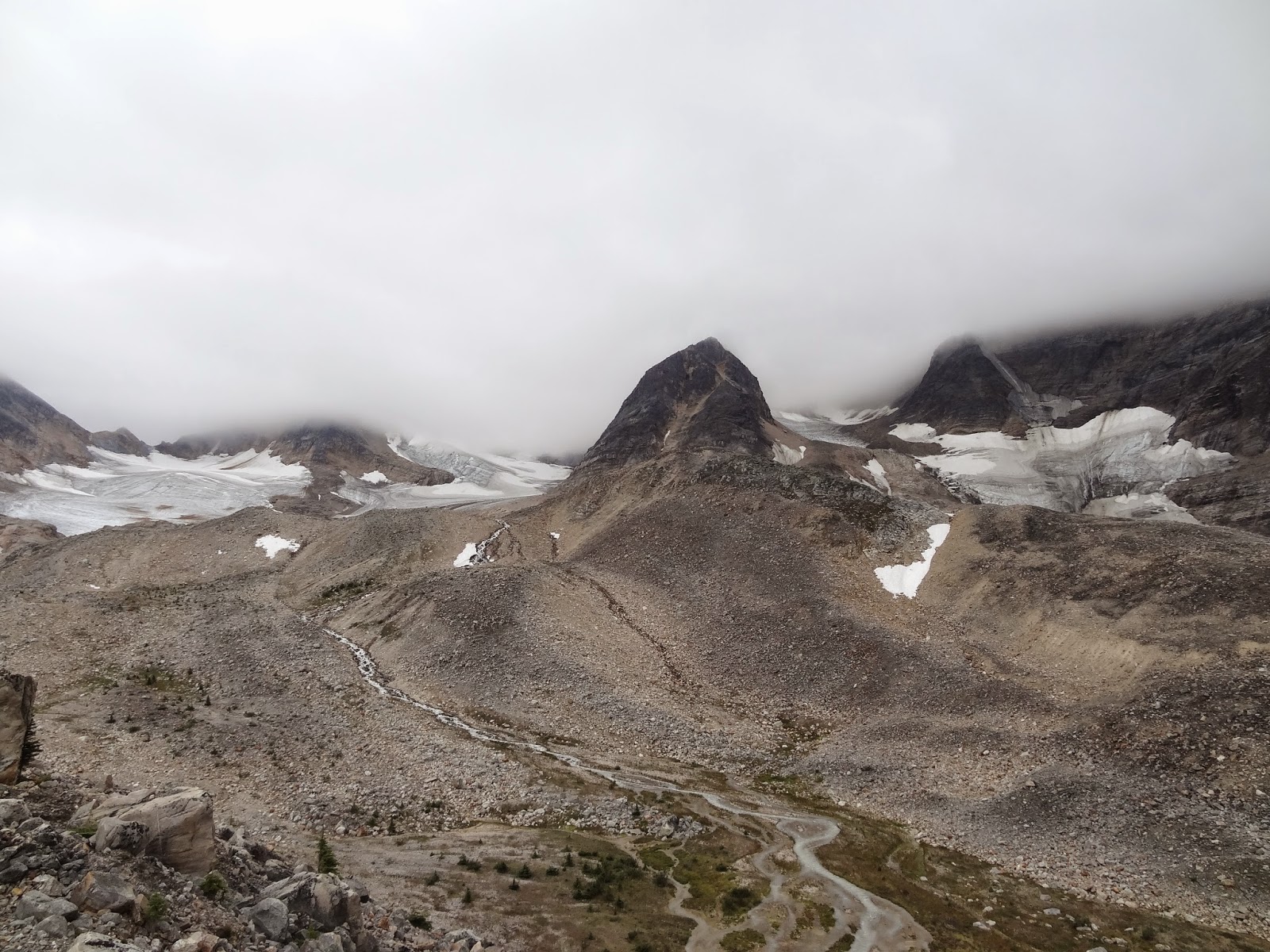 Eremite Valley looking south at Eremite and Alcove Mountains hidden in the clouds. 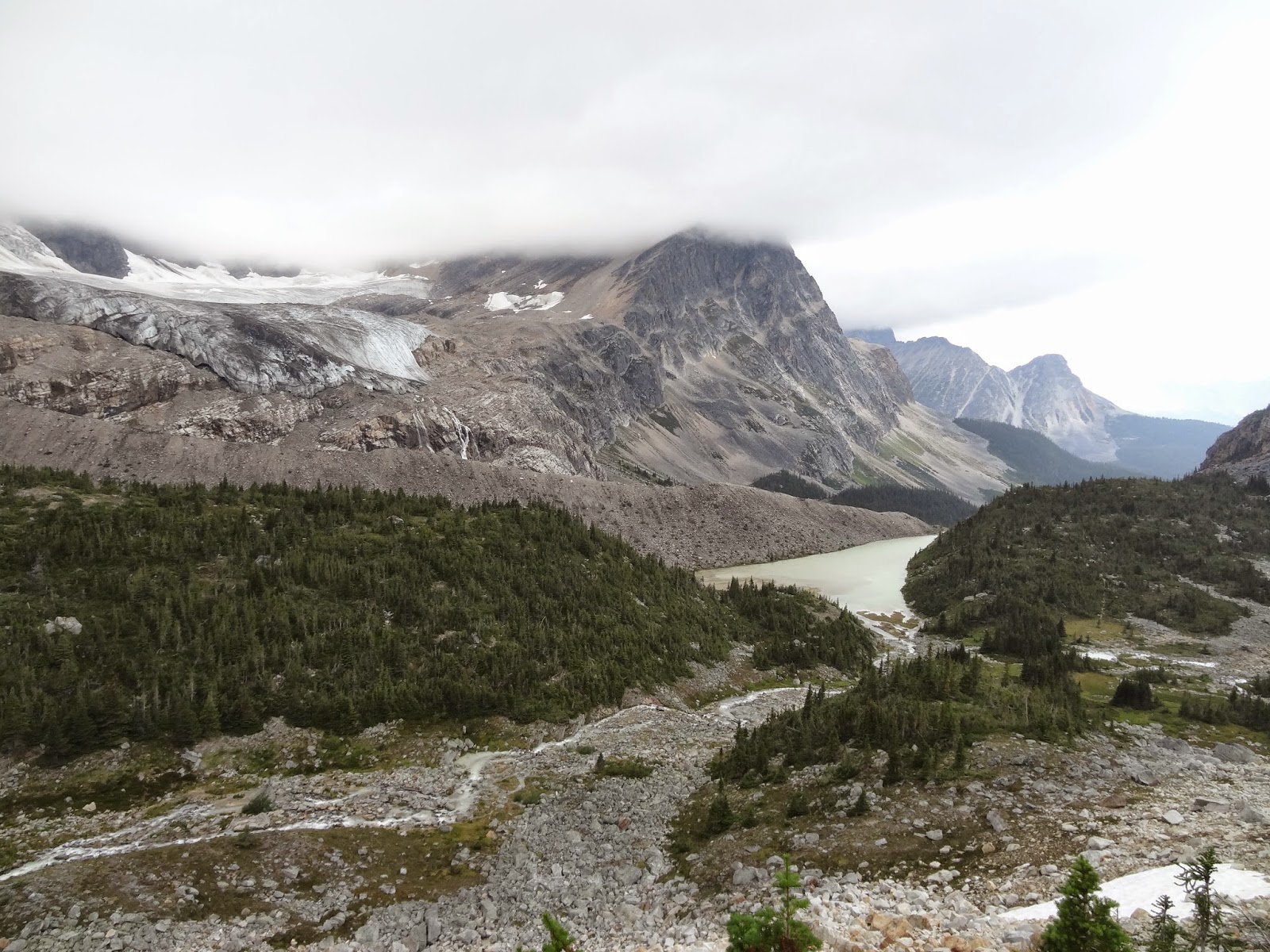 Eremite Valley looking north back down the valley. Eremite Glacier in the top left. 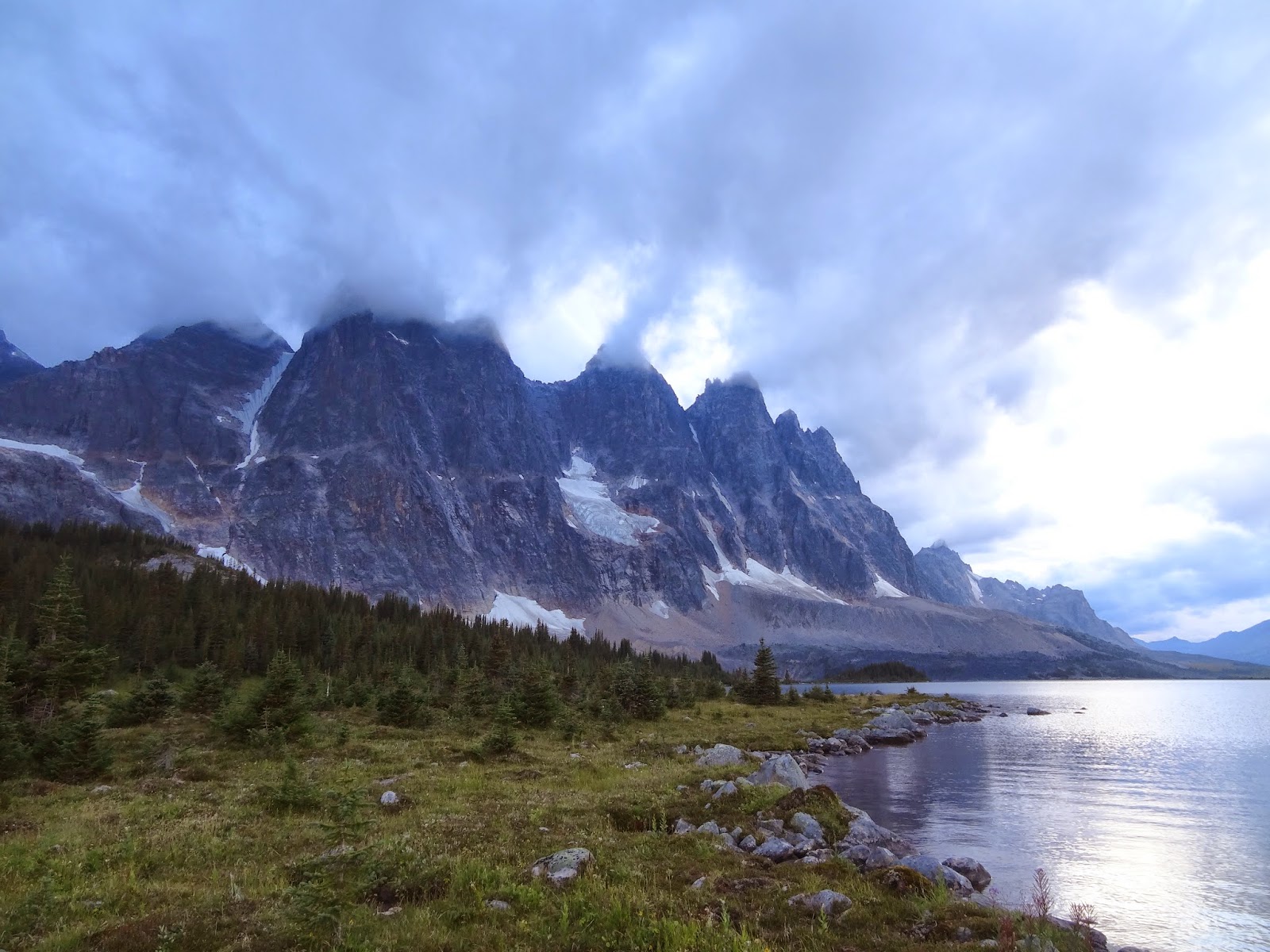 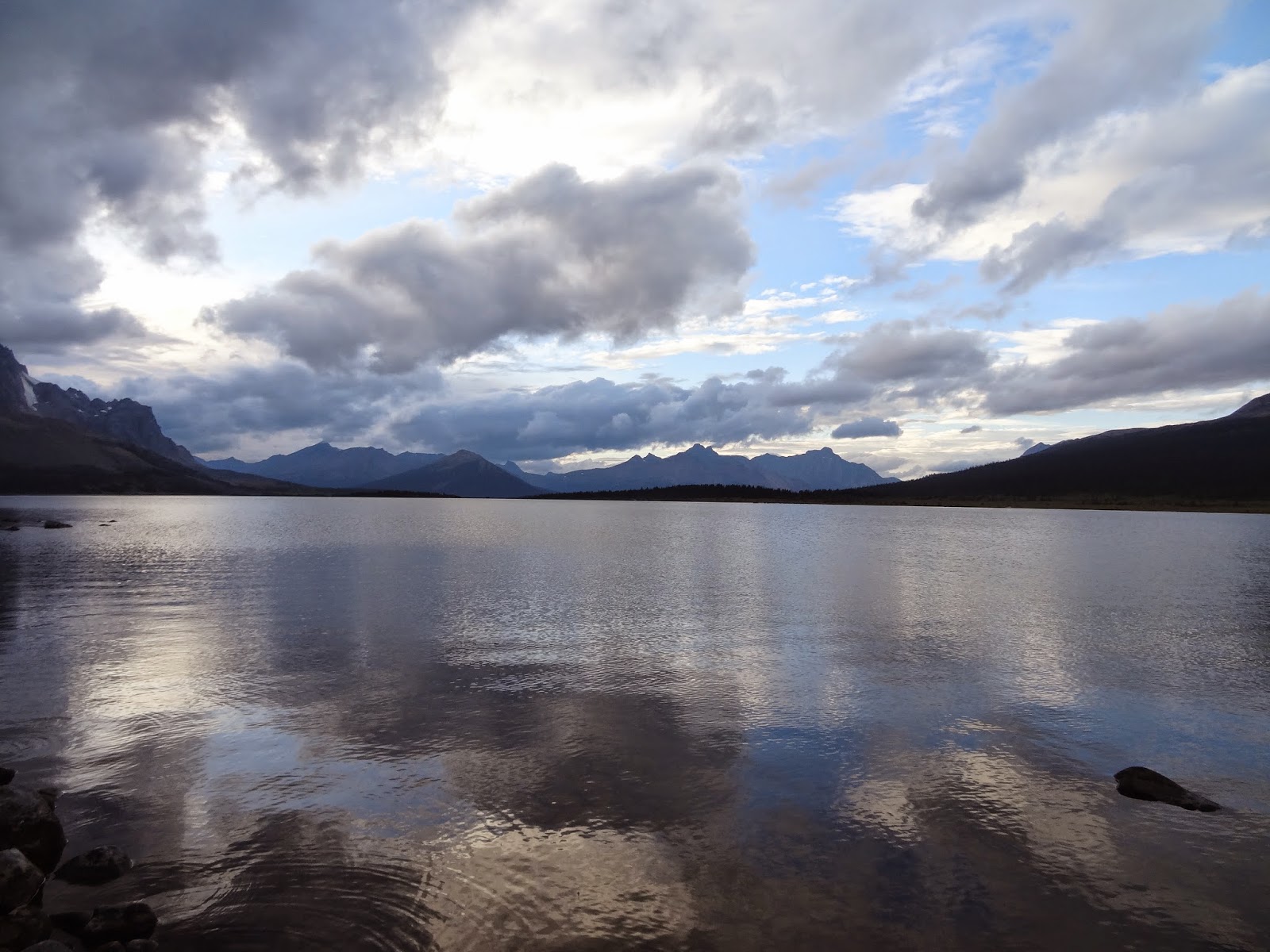 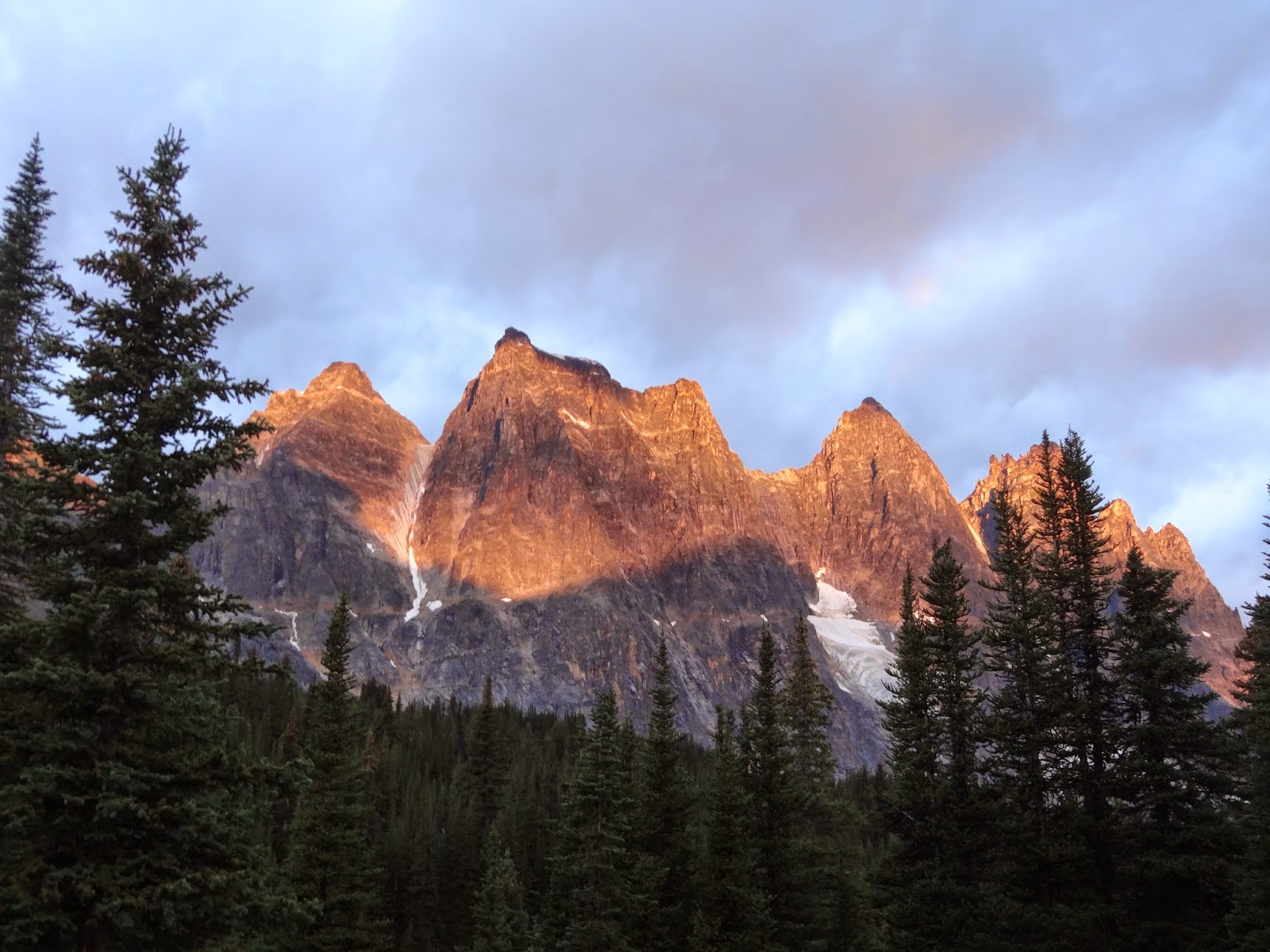 The fifth day. Alpine glow as we wake up early in the morning. 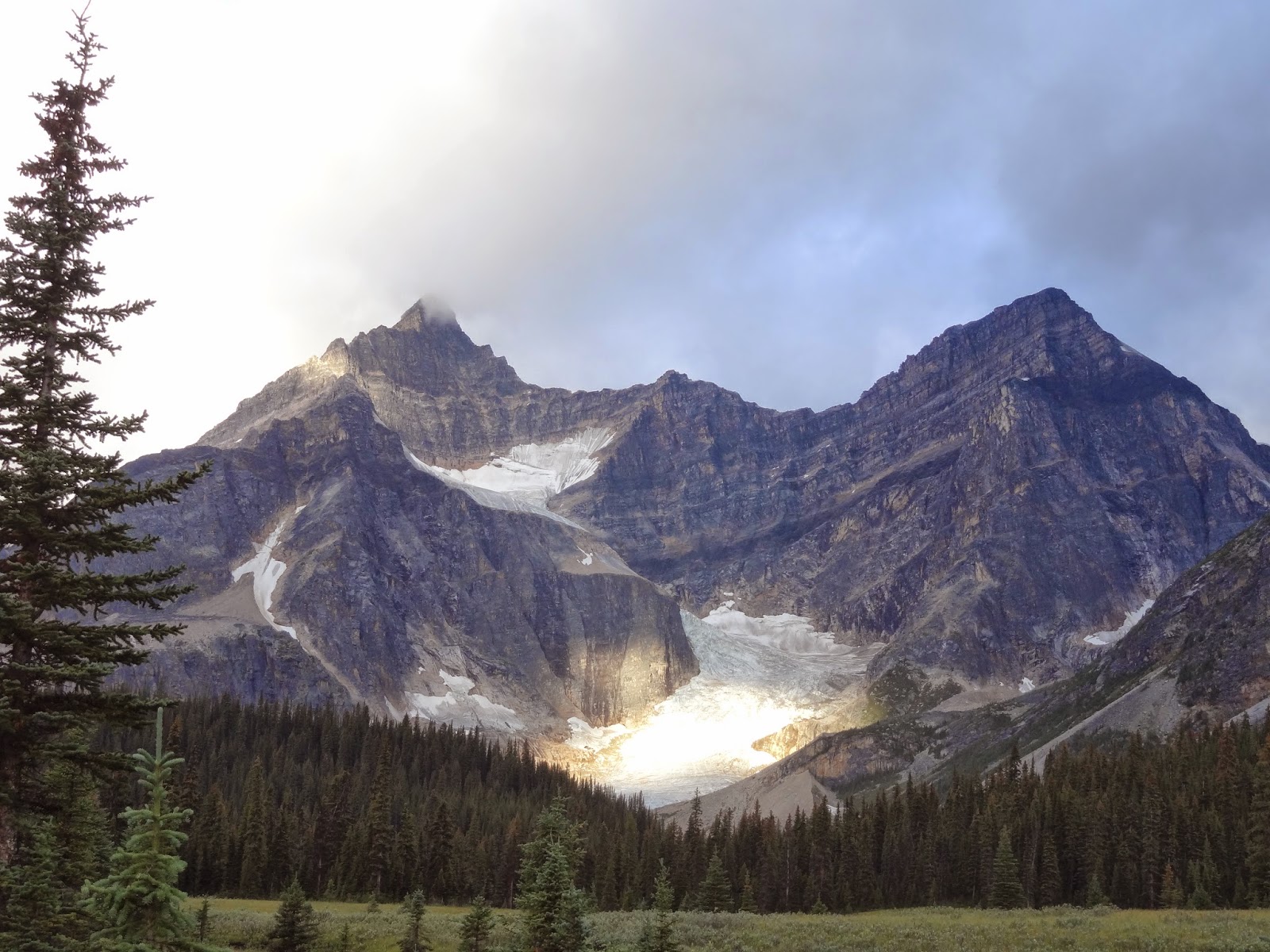 Outpost Peak from the trail junction of several side trails I mentioned earlier. 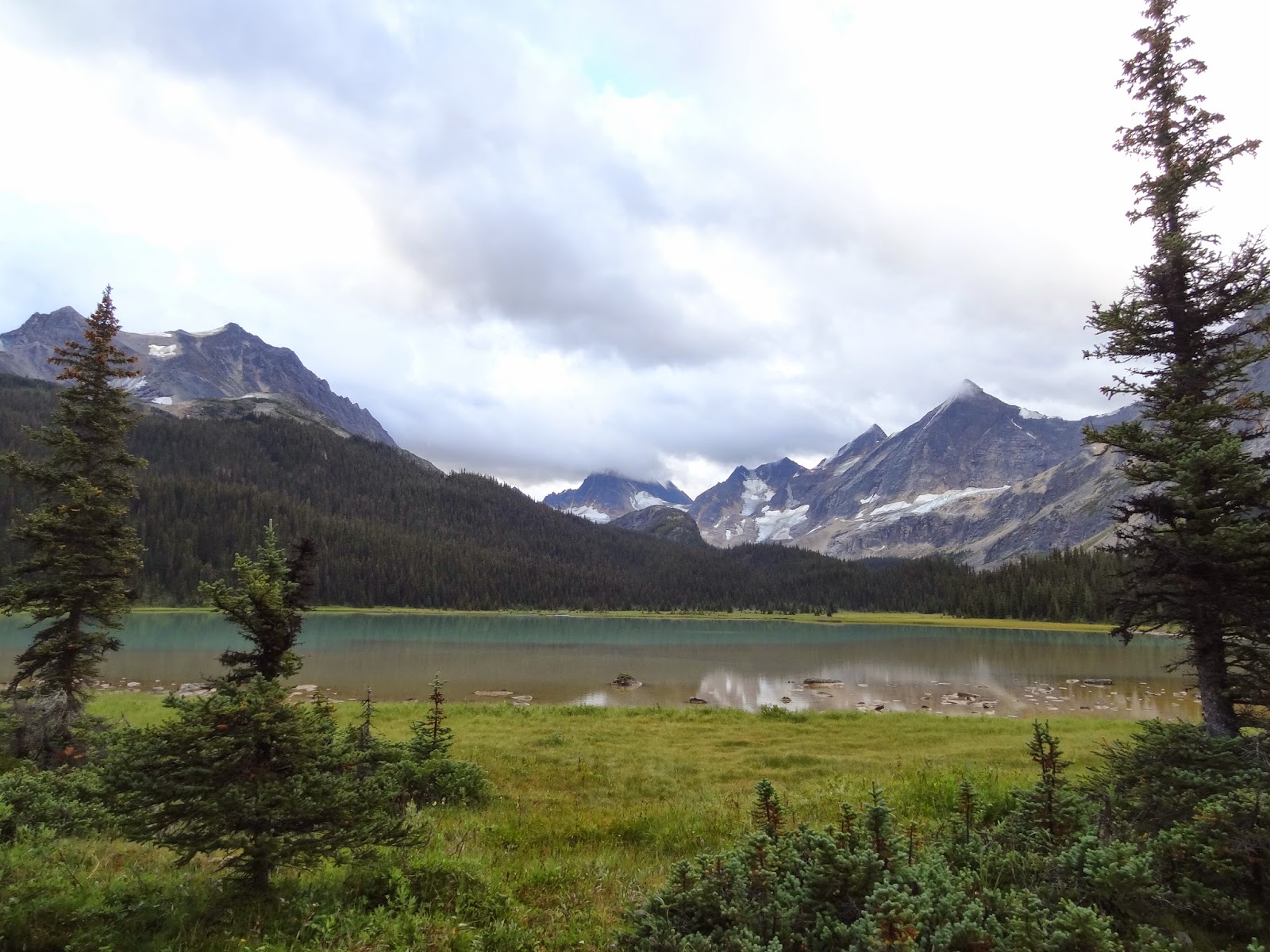 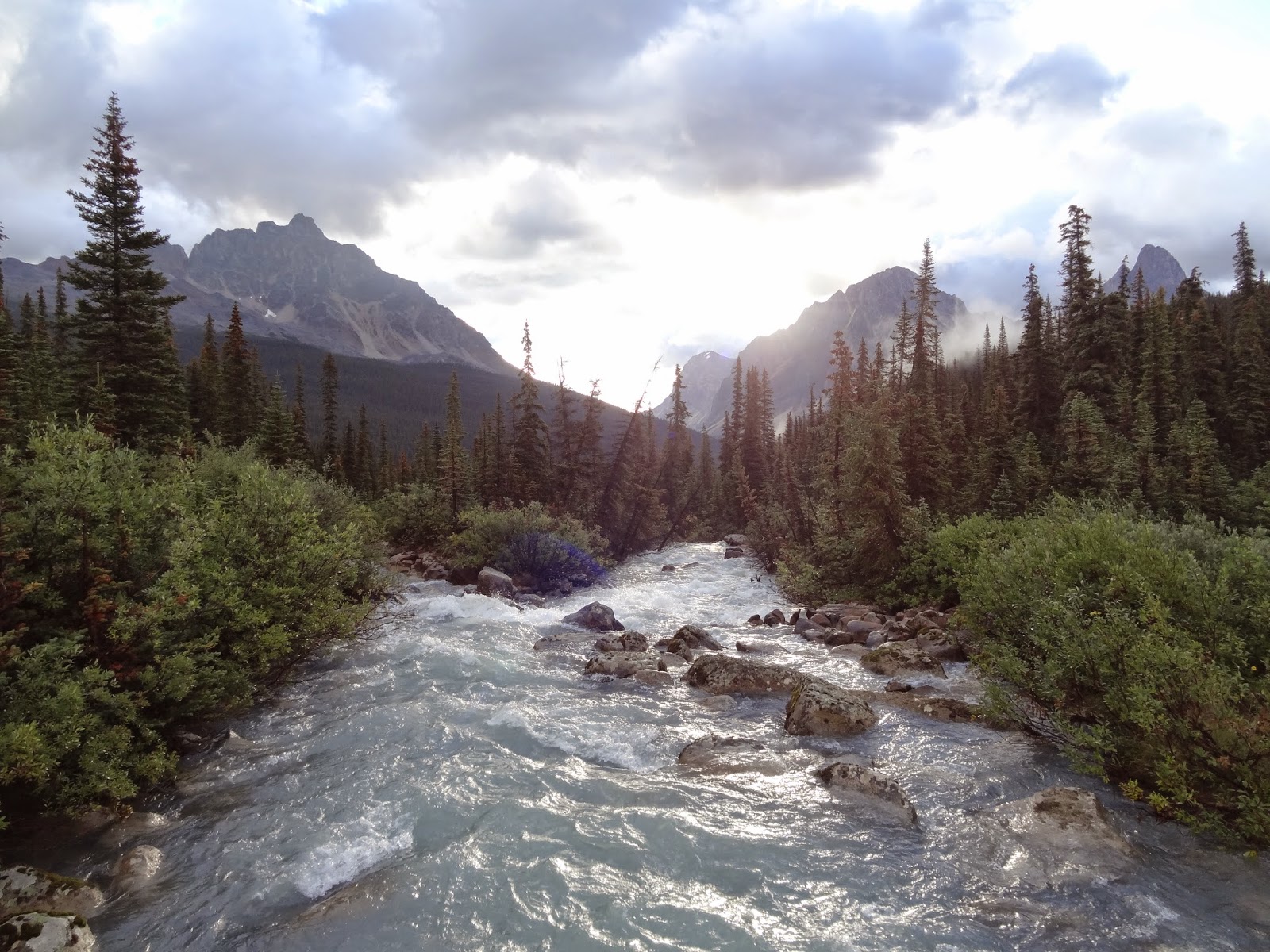 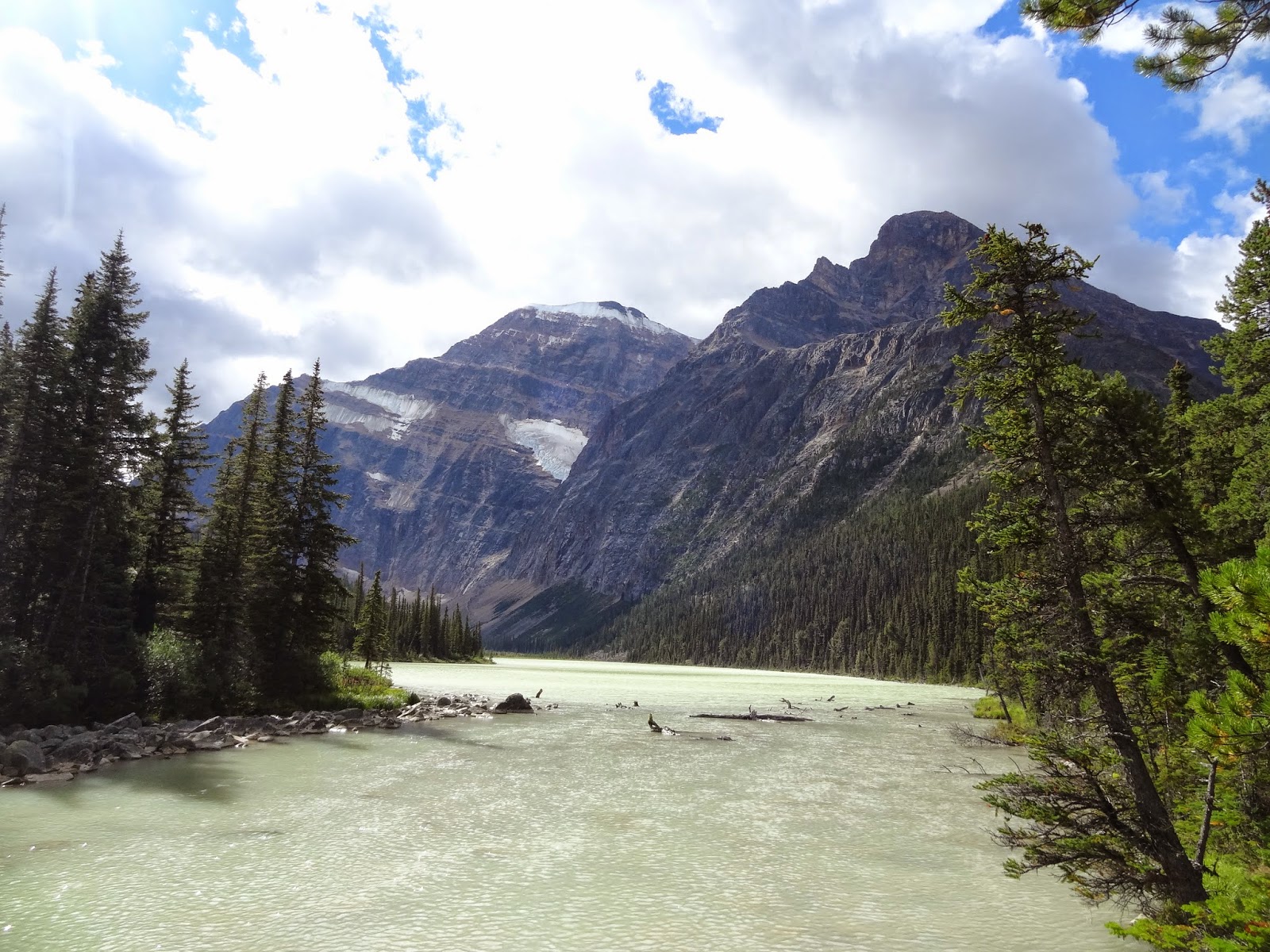 After a long wet hike down the ACC Huts trail then onto the main Astoria River trail we are finally back at the south trailhead at Cavell Lake looking towards Mount Edith Cavell. The Astoria River trail was very wide and quite level. It was a nice break, though a bit of a plod, after the narrow ACC Huts trail. The vegetation along that trail had gotten us quite soaked through as we went along it. It also went through some unpleasant boulder and marsh sections. Can't say I really recommend it, but then I didn't see the alternative part, which is the main trail that goes through Switchback campground. The ACC trail is most likely better when it has not just rained. It did have one other advantage though: we got to see a very young Pine Marten on one of our breaks. It scampered out onto the trail and stared at us for about a minute before scampering back off. I couldn't get a photo but it was super cute.